You are here: Home / Guides / How Is Whisky Made?

Whisky is a type of distilled alcoholic drink made from fermented grain mash which has been made for centuries. Different types of grains are used to make different types of whiskies, including corn, barley, wheat, and rye.

Whisky-making involves five main steps–malting, mashing, fermentation, distillation, and maturation or ageing. In this article, we take a detailed look at how whisky is made, explaining each of the main stages. 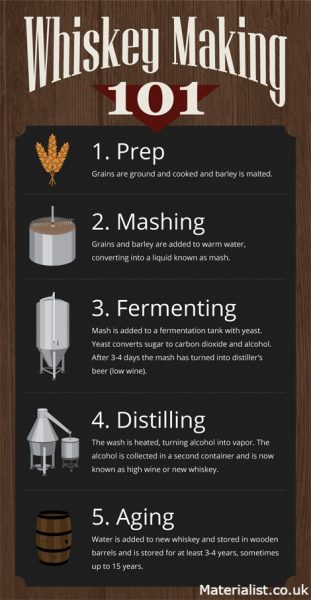 The grains used to make whisky contain starch. It is the starch that is transformed into soluble sugars to make the alcohol, achieved partly through a process known as “malting.”

It begins by soaking the grains for up to three days in warm water. Afterwards, they are spread on the floor of a building known as a malting house. At the malting house, the grains are turned on a regular basis to uphold a constant temperature, which may also be done on a commercial scale in massive rotating drums. 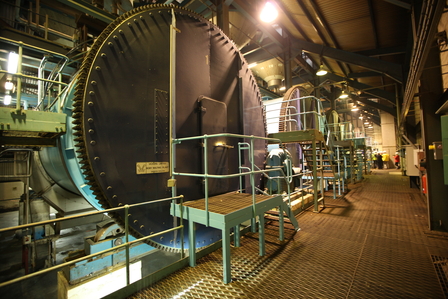 When the grains start to sprout, the grains are dried in a kiln to stop the germination. Peat is usually used to power the kiln, and different types can be used. The type of peat used, and the duration of the drying process both influence the flavour of the resulting liquor.

The grains are now referred to as malt. The malt is then ground down in a mill to remove the husks and other debris.

The next step is mashing.

Mashing is the process of extracting the sugars contained in the grain before fermentation. It involves grinding up the grains into an enormous tank where they are agitated. The tank is known as a mash tun or tub.

It’s worth noting that even when a different type of grain is used, some ground malted barley is normally added to speed up the conversion of the starches to soluble sugars. The result is a porridge-like mixture known as mash.

If the mixture has been strained of solids, though, it is called wort. After the maximum possible amount of sugar has been extracted, the mash moves on to the next step–fermentation.

The fermentation stage involves cooling the mash or wort to 20°C and pumping it into washbacks. Living yeast is then added to trigger the fermentation process. The yeast feeds on the sugars to produce alcohol and small amounts of other compounds called congeners.

These compounds influence the flavour of the whisky, and the process also produces carbon dioxide

The wash froths aggressively. Rotating switchers cut the wash head to ensure it doesn’t overflow. The fermentation subsides after about forty-eight hours. The wash is composed of six to eight per cent of alcohol by volume (ABV).

Distillation is the process of heating a liquid to separate its constituent substances. Distillers use different techniques to make various types of whiskies.

For example, Single Malt Scotch Whisky is made through the batch distillation process. It involves the use of a pot still made of copper. The wash is heated in a wash still up to the boiling point of 78°C, and when the alcohol boils, the vapour rises into the condenser.

During the second distillation process, it is imperative that the distiller knows when to separate the spirit’s ‘main run’ or ‘middle cut’ from the early ‘foreshots’ or ‘after shots’ that contain less desirable components.

You should realise that it is the middle cut of the distillation that goes on to age in the oak barrels. The middle cut is also known as the Heart of the run or New Make. Worthy of note is that size, shape, and the number of stills has a significant contribution to the flavour and character of the final liquor.

It is largely attributed to the contact of the liquid with the copper. The technique of condensing the distillate can also have a significant influence on the final spirit’s flavour and character.

>> Read also our guide to the best whisky glasses

After distillation, the resultant spirit is transferred into oak barrels or casks and stored. Most whisky makers use oak casks that have previously been used in the Spanish sherry or American bourbon industries. For the spirit to be legally recognised as whisky in Scotland, it must spend at least three years in the casks maturing. Many investment grade whiskies are left for decades to mature. 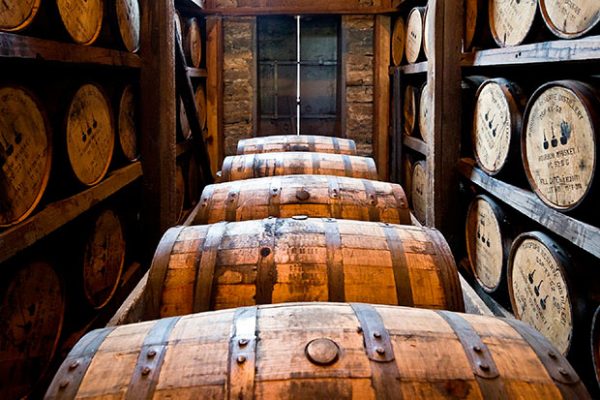 As the spirit matures, its flavours mix with natural compounds in the wood barrels. It results in a distinctive flavour and aroma. Also, the fact that wood is porous means the casks will absorb air from the surrounding environment in which they are kept.

It also makes the beverage acquire some distinctive characteristics, depending on the environment. Some distilleries have their maturation warehouses next to the sea while others have theirs in the middle of the highlands. Other maturation facilities are on islands.

These environments have different air quality, humidity levels, and temperature. The final product will certainly be different, and every year of maturation sees a 2 per cent loss of spirit through natural evaporation.

The process is known as the ‘angel’s share.’ It is the main reason older whiskies are scarce and expensive.

Bottling
After ageing, whisky is bottled at not less than 40 per cent ABV. It may be chill-filtered or filtered using other techniques to ensure it doesn’t become cloudy when ice or cold water is added. Most leading whisky brands bottle several barrels at a time. When only one barrel is bottled at a time, however, it is labelled as a single cask or a single barrel.

And that is how whisky is made, from malting the grains to bottling the final product we buy in liquor stores.