You are here: Home / Guides / A Brief History of Wine

Wine is an alcoholic beverage made from fermented grapes. Different variations of grapes are used to produce various types of wine. Spain, Italy, France, Chile, and the United States are the world’s leading wine-producing countries currently.

For centuries, wine has been used to ease the bad times and help celebrate life. In this article, we explore the history of wine, from its origin over 10,000 years ago to the different types of wine we have available today. 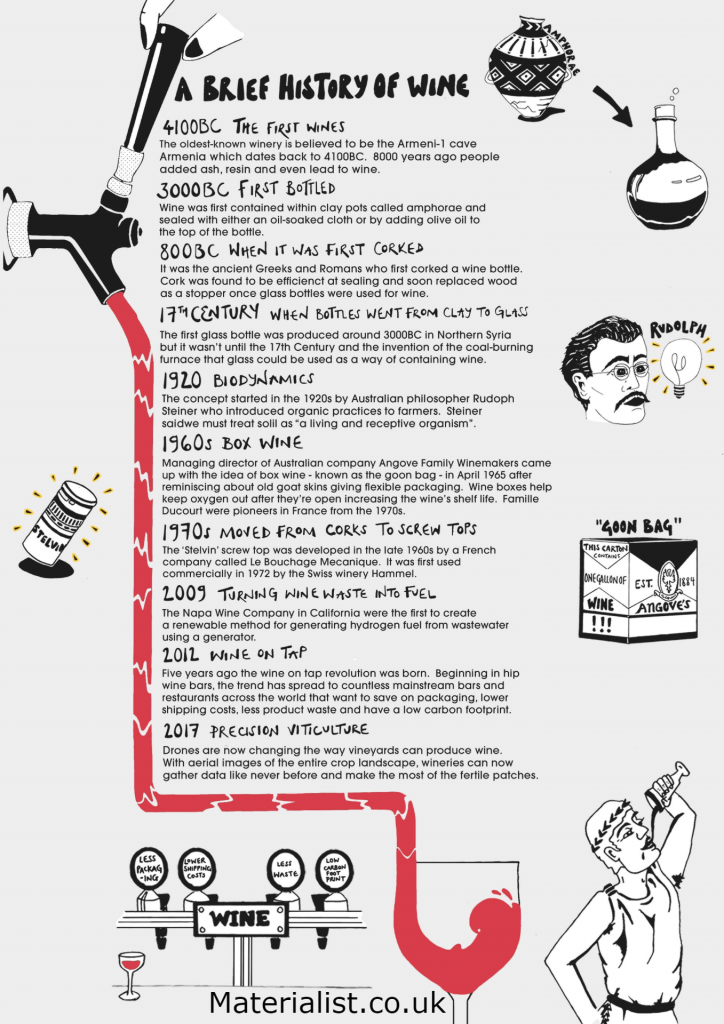 Vines existed even before there was any concept of our history. It was during the era when the planet was covered mainly in forests, and our forefathers were yet to figure out the basics of shelter, fire, and other needs.

There were no vineyards. Vines naturally climbed up the trees and only flowered after breaking through the canopy. It’s not easy to tell who drank the first-ever wine. It might have happened by accident. However, the intentional production of wine marked the beginning of wine’s fascinating history.

The History of Wine

It is believed that wine production began about 7,000 years ago in what is referred to as the “cradle of civilization” or the Fertile Crescent. The myth has it that some grapes fell on the ground and remained there for too long. The fruits eventually split open, and the yeast present on their skin caused them to ferment.

Those who ate the fermented grapes became inebriated, and the peasants thought the grapes had some form of magical quality. Grapes grow across the globe, but those in the Fertile Crescent were of the Vitis vinifera species, just the right variety for wine.

The earliest evidence of grape wine, dating to about 6000 B.C., was discovered in the region of modern Georgia. Both genetic and archaeological evidence shows that the earliest wine production in other areas happened much later, probably in the Southern Caucasus or the West Asian area between northern Iran and Easter Turkey.

The earliest evidence of a wine-making facility is the Armenia-based Areni-1, which is more than 6100 years old.

Wine production quickly spread from the Middle East, through the Mediterranean region and into continental Europe. While other regions produced wine at different times in history, Europe became the home of fine wine until the twentieth century. Even today, all the newly developed wine-producing areas in the world produce wines that were originally from Europe.

The spread of wine-making techniques toward the west can be attributed largely to the Phoenicians. They moved in various directions from city-states base along the Mediterranean coast of modern-day Syria, Israel, Palestine, and Lebanon.

Wine in the 20th Century

Until the second half of the 20th century, wine fermentation utilised natural yeasts. These yeasts normally took too long to start working and were prone to spoilage. It often led to unreliable results.

The 20th century saw yet another revolutionary innovation in the wine-making industry–synthetic corks and screw-cap tops. Introduced in the 1950s, these newly developed bottle stoppers threatened the existence of the conventional natural cork, which dates to the ancient Egyptian era.

Screw-top technology and synthetic corks faced stiff opposition from oenophiles at first. They gradually gained popularity over the years, however.
It may be attributed partly to the fact that traditional corks had their own shortcomings, such as leaking, drying out, and crumbling. The new technology seemed to solve these problems.

Wine in the 21st Century

In the 21st century, wine can be found in virtually every part of the world after moving a million miles from its original roots in Georgia. This century has also seen some game-changing innovations in the world of wine.

One of the most fascinating innovations is a process known as micro-oxygenation (commonly referred to as mox). The process helps to reduce various risks of the traditional techniques of ageing red wine.

Traditional techniques have red wine cellared in cork-sealed bottles. The cork has tiny pores through it, which allows oxygen to permeate the wine as it matures. It results in the “softening” of the natural tannins, making the wine develop a distinctive flavour profile.

Micro-oxygenation mimics natural ageing by gradually releasing oxygen into the wine as it is made. The result is smoother wines that have a more stable colour and fewer undesirable undertones.

DNA sequencing has also made a significant contribution to 21st-century wine production. Researchers have been able to track the spread of Saccharomyces cerevisiae for more than fifty years. They have been able to compare various geographical regions, potentially allowing for the improvement of wine in the future.

There are numerous mythical tales about the origin of the wine. The scriptures talk about Noah and the sons preparing wine at the base of Mt. Ararat.
There’s also the legend of the Persian king who banished his harem lady from his kingdom. The lady became hopeless to the extent of contemplating suicide. She went to the king’s warehouse and found a jar labelled ‘poison.’

The jar contained grape leftovers that had rotted and were considered inedible. She didn’t know that the “rot” was caused by fermentation. Once she drunk the so-called poisoned, the harem lady experienced an unusual, but pleasant feeling.

She informed the king of her discovery. The king became so elated that he accepted the lady back. He also made a decree that all grapes produced in Persepolis would be used for making wine.

Wine is one of the oldest products in history. It existed since the times of the Pharaohs and is still one of the most popular beverages today. People consumed wine for a variety of reasons, including religious purposes, rituals, and for personal enjoyment.

It remains a central part of history, and wine enthusiasts everywhere appreciate how the art of wine-making has evolved through the ages.