If you are looking for the best men’s watch for under £4K, this article is for you.  I have researched every possible watch available in this price range and narrowed them down to four models.

A £4k budget for a luxury watch is nice, but you will always want a little more.  £4K is not quite enough to buy a new Rolex, but you could pick up a used model. Below are a few options I have found on the top second hand watch websites.

I researched the three main luxury used watch websites: Watch Finder, Goldsmiths Pre Owned and Chrono 24 to see what was available. Your first choice should always be a Rolex in my opinion, so this is the luxury watch brand I searched for in the £4K price range.

The majority of used Rolex watches are women’s watches or do not come with a box or papers.  If you are looking for a Men’s used Rolex for under £4K with papers and box – here’s what is available. Note they will be old but still highly collectable watches.

For those of you who don’t want to take on the risk of buying a used watch online, I’ve put together a list of amazing watches that all come in under four thousand pounds. All these watches are automatic and from good luxury watch brands.

Tag Heuer was founded in Switzerland in 1860 by  Edouard Heuer and produced his first Chronograph in 1882 – surely one of the first chronographs ever produced. 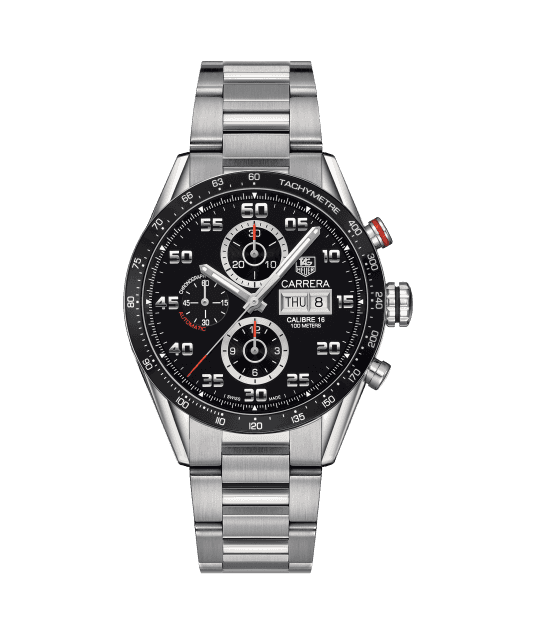 The Tag Heuer Carrera models was launched in 1963, aimed at racing drivers with it’s large face. This is a gorgeous looking automatic watch, water resistant to 100 metres – so perfect if you love scuba diving. We expect an automatic watch for this price, my £1000 Tag is quartz and a right pain every time the battery needs changing.

The width of the face is 41mm which is the average Carrera model size, though they can be bought in a 45mm.

The watch comes in two different colours, the black face above or a blue face which stands out a little more. I would personally go for the black face as it could be worn with any clothes. My current Tag has a red face, which was an error in hindsight as it really clashes with a lot of my shirts.

IWC was founded in 1868 by Florentine Ariosto Jones, an American watchmaker who wanted to combine his design ideas with Swiss watch-making technology.   Florentine developed his first pilot watch in 1936, then went on to supply the RAF with the Big Pilot Mark 11. 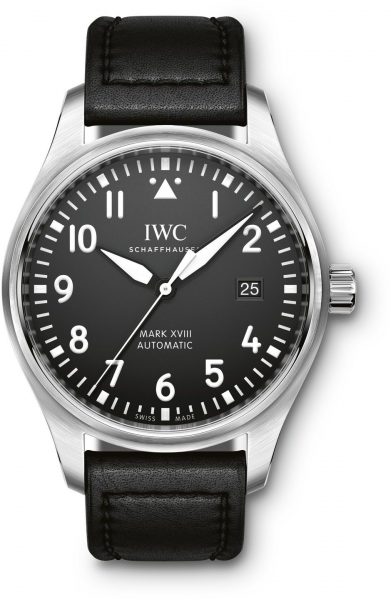 Being a  pilot watch, the face is super-clean and easy to read with distinct, large numbers. The dial has nice dimensions at 40.1mm diameter with a height of 11.1 mm. The 12, 3, 6 and 9 markers are painted with luminescent paint, enough to easily tell the correct time when dark.

As expected, the watch is automatic, instantly recognised by the sweeping second hand.

I love the chunky winder on the side and the back of they watch sports an aeroplane engraved into the case, which is a nice tough.

Bell & Ross have not been around for decades like most luxury Swiss watch brands, they only started producing watches in 1992. Bell & Ross saw a gap in the market for luxury watches that could perform well in extreme environments. Their first watch was designed to function well in space, their second was made for a French bomb disposal unit and they continued from there. They won the World record in 1998 for water resistance depth at 11,000M with the infamous Bell & Ross Hydro Challenger. 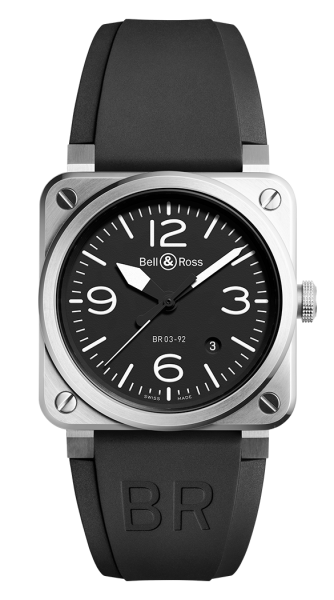 The BR0392 is a square watch, not to everyone’s taste but I love this style. The square design is drawn from aviation history and has a solid look. The diameter is 42mm, but the watch thickness is only 11.5mm, which sits really nicely on your wrist.

The watch casing is made of ceramic which is lighter than steel watches and highly scratch resistant in a black finish. High level ceramics for watch-making were pioneered by Rado and are now slowly being adopted by other luxury watch brands. You can buy the BR0392 watch in a military green but I prefer the black version.

Like all the watches reviewed in this article, the BELL & ROSS BR0392 Phantom ceramic uses an automatic movement (self-winding) and does not need a battery.

The watch is 100m water resistant and suitable divers and army professionals.

>>If you are investing in a luxury automatic watch, be sure to check out our guide to luxury watch boxes and winders

Breitling has a long history dating back to 1889. The brand was founded by Léon Breitling who has an obsession with chronographs, he then went on to patent his own model.  The patent covered his tachymeter, which could measure the speed of vehicles – now becoming the main mode of transport by 1905. This tachymeter also allowed police to measure vehicle speeds according to Breitling, allowed them to issue the first speeding tickets!

Breitling went on to win many awards and partnered with Bently to produce all the dials in the Continental. 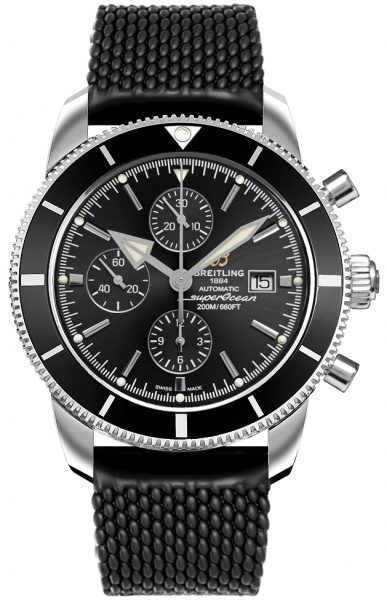 The Breitling Watch Superocean Heritage II was first launched in the 1950s by Leon’s grandson, Willy Breitling as a 25 anniversary model of his rein over the family business.  The watch was unique as it was water resistant to 200m, so aimed at commercial divers.

The B20 model is larger than the initial 50s model with a diameter of 46mm, the update being released in 2017 to meet the demand for oversized watches.

The automatic movement of the B20 stores power for 70 hours, so can be left for this period and still hold good time – gaining approximately 3 seconds per day to be precise.

I love how clean this dive watch looks with it’s  super-neat lettering and diamond hour hand. This model comes with a steel strap, but can be fitted with a rubber strap if you prefer the feel.