You are here: Home / Guides / A Guide to Coffee Beans from Around the World

Coffee’s one of the most popular non-alcoholic beverages in the world. Its origins can be traced to 10th century Ethiopia, although, by the 16th century, coffee-growing had spread to as far as Italy, Turkey, the Middle East, Asia, and America. 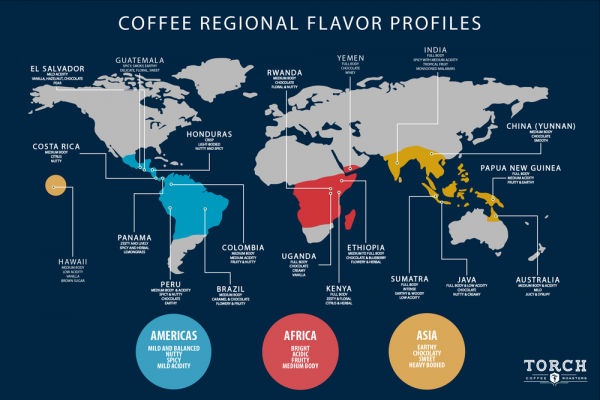 As a result of this 16th-century coffee explosion, there are several different kinds of coffee beans in the world today. Robusta and Arabica are the main species of the coffee plant. Every other coffee bean out there is a variation of either one or a combination of both.

Factor in the climates of the different regions that they’re grown in, as well as the individual technique of each farmer, and you find that there can be endless variations.

Arabica coffee makes up for about 80 percent of all the coffee grown in the world, and make up the majority of coffee used with coffee pod machines.  Curiously enough, the Arabica crop’s yield is much lower than that of the Robusta. A tree produces about 5 kilograms of beans on average. What’s more, Arabica is quite vulnerable to pests and diseases. It demands more in terms of care and resources to create.

It is safe to say that Arabica is the most popular type of coffee beans in the world. Experts consider it more flavorful as Arabica blends usually contain berry and fruit aromas.

It takes longer to increase the yield of an Arabica coffee tree. As such, Arabica is typically more expensive than Robusta. Arabica’s taste can be described as full-bodied. Though most coffee drinkers favour Robusta because of its higher caffeine content, some blends of Arabica can be used to make stronger beverages, like espresso – using finer powder from the coffee grinder.

Robusta coffee comes from the coffee canephora crop, a plant known for its bitter, acidic taste. The Robusta plant yields more compared to the

Arabica, and this is why Robusta is typically cheaper.

Taste-wise, Robusta has earthy tones and is considered highly acidic. It’s got significantly more caffeine than Arabica, which is why it is the most common type of coffee bean used in the making of espresso.

Robusta and Arabica blend rather well together. The earthy tones of the former complement the full-bodied taste of the latter, as is evident in a lot of Italian coffee blends.

The Robusta plant is much more resilient than the Arabica. It’s more resistant to pests and is capable of producing high yields even in sub-optimal conditions. It is typically easier to grow and fairs better at lower altitudes than Arabica.

Robusta is grown predominantly in the Eastern Hemisphere (Indonesia, Africa, etc.). Arabica, on the other hand, does well in high altitude regions like 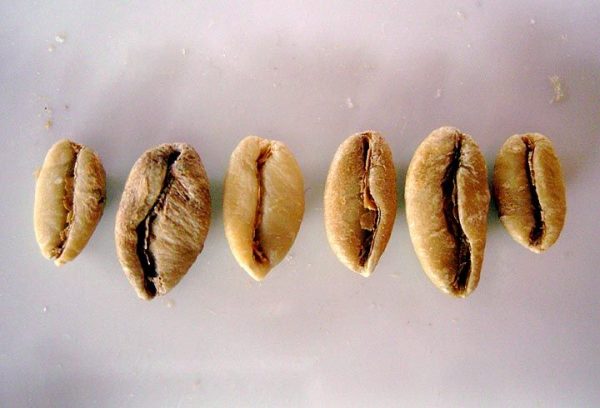 The Liberica coffee bean is the rarest in existence. It is native to regions of western, eastern, and central Africa. Countries like Uganda, Liberia, and Angola grow Liberica coffee, although there are naturalized versions of the plant in Seychelles, French Polynesia, West Indies, and the Philippines.

Its fruits are larger than those produced by the Arabica tree. It is also more resistant to pestilence and disease.

Though it is considered a derivative of coffee Liberica, Excelsa coffee makes up for about 7 percent of all the coffee produced in the world. Its beans resemble those of Robusta and Liberica plants due to their taste and appearance. However, Excelsa coffee is known for its tartness. Its beans are also shaped like teardrops.

Although all coffee comes from just two plant species (Arabica and Robusta), there’s plenty more variation out there. Single-region coffee blends, for instance, typically have unique profiles owing to the conditions or the ingredients used in their making.

They also tend to be pricey, seeing that they require more in terms of attention and resources to create. Here are five examples.

The most expensive coffee in the world comes from Thailand. The Black Ivory Company makes their special type of coffee by first feeding baby elephants Arabica coffee beans. These beans go through numerous digestive processes before they’re excreted by the elephants.

The end result is a robust, highly unique flavor. Because the beans can only be prepared in small amounts, Black Ivory coffee is both rare and expensive.

The small, rich coffee beans used to make Finca El Coffee are quite rare. It is also considered one of the most costly coffees in the whole world.

The quality of the taste is improved by the processing method. The beans are first washed in a single channel before broken twice. It’s an expensive and rare type of coffee, yet one that’s quite popular around the globe.

Hacienda La Esmeralda coffee is grown exclusively in Panama on the slopes of Mt. Baru, purportedly in the shade of guava trees.

The high altitude, as well as other factors, have turned this type of coffee into a rarity and a delicacy at the same time. Connoisseurs and curious parties have to part with over $300 for just a pound of the coffee, which is famous for its rich flavor and exquisite taste.

Black Ivory coffee and Kopi Luwak have one thing in common. These coffee beans are first passed through the digestive systems of animals before being processed. In the case of Kopi Luwak, the animal is the Asian palm civet, a small cat-like animal.

The digestive enzymes of the civet cat ferment and impose a delicious taste on the coffee beans. The beans are collected from the feces of this cat, which is native to Bali, then processed. Kopi Luwak coffee is not as rare as Black Ivory coffee, but it is relatively expensive. Sometimes it is referred to as civet coffee.

Grown on the island of St. Helena, this coffee was allegedly Napoleon Bonaparte’s favorite. The unique island climate it is grown in gives it a superb flavor, but since it is grown about 1,200 miles off the coast of the Atlantic, shipping costs are exorbitantly high.

This is the main reason why St. Helena coffee is expensive. It’s taste, which can be described by its strong caramel flavor and citrus accents, is also a huge reason why this coffee is so pricey and popular.

It would take considerably more time to list down all the coffee beans in the world. What’s important to remember is that all coffee comes from two types of beans: Arabica and Robusta.

Different regional climates, crossbreeding, processing styles, and other factors have contributed to the rise of numerous coffee beans, each of which has a unique flavor profile.

There’s more to enjoy about coffee than most people know. This is one of the best times in history to become a coffee connoisseur.